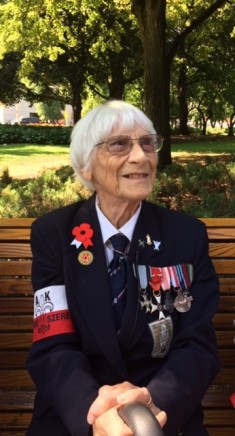 “Crazy Brave: My Mothers Story” is a 30 min. documentary about Eva Poninska- Konopacki a young woman who joined the Polish underground resistance movement in 1944 (called the home army — Armia Krakow AK in Polish) along with other civilians to liberate Warsaw from Nazi occupied Poland. EVA was given the highest award for bravery for her efforts during the resistance movement — The Virtuti Military — Cross of Valour — the most distinguished medal of honour of the time. It is estimated that 16,000 resistance fighters were killed in the 63 day uprising and 6,000 wounded.
Produced, directed by her daughter Margaret Konopacki, this short educational doc captures her mother’s involvement in one of the most tragic and controversial events of the Second World War.
Margaret comments: “ I grew up in a household in east end Ottawa and went to Polish School every Saturday. Growing up, many of my parents friends were from the Polish
 resistance; immigrants like them. We were only allowed to speak in Polish at home and my parents patriotism and views about their homeland impacted me deeply. I knew at a young age about their involvement in the Warsaw Uprising but was surprised that most of my Canadian friends had never heard about it. The Jewish Ghetto Uprising in Warsaw was always mistaken for the one my parents participated in. I made this very low budget doc to commemorate the efforts of Poles like my mother and father — a sacrifice for our own freedom.
I am deeply proud of my parents and my mother’s strength, courage and positive outlook. During my own bleakest moments facing unsurmountable bereavement my mom helped me to deal with death — with her steel will, unbendable Catholic faith and still positive view of the world. I feel that today in our challenging planet — more than ever young people need role models like my mom.
Historically, this was the largest single military effort taken by any resistance movement during WWII. This piece of history seems to be missing in our Canadian schools — the question remains — can we learn from the past and not repeat the tragic mistakes? Can our younger generation honour our hero’s and read our history and thank our veterans who lost everything for freedom.” On Aug. 1st each year we honour the hero’s of the Warsaw Uprising and for me they were my mom and dad.”
Eva joined 400,000 other poles who became the home army (AK) commanded by General Tadeusz Bor-Komorowski. This resistance attacked the German Forces all over Poland on Aug. 1st 1944 and within three days gained control of most of the city of Warsaw.
 Germans sent in reinforcements bombing them with air and artillery attacks. Meanwhile the Soviet Army waited across the Vistula River in Warsaw waiting for the Poles defeat.
Many believe the “Warsaw Uprising” was the greatest betrayal by the Allies as the Polish insurgents fought alone for 63 days expecting reinforcements to come within a week — that never came.The Soviets halted their own offensive and refused to allow allied planes to help resupply the Poles as the Home Army split into disconnected units and was forced to surrender after great casualties (16,000 died) and lack of supplies. Bor- Komorowski and his forces were taken prisoner including my mom and dad (Thaddeus Konopacki)
The Germans then systematically deported the remainder of the Warsaw population and levelled Warsaw to the ground while herding the defeated Home Army into Prisoner of War Camps. Mom ended up in Oberlangen, Germany and dad in Bergen- Belson.
The uprisings failure allowed the Soviet Government to take over Poland while the Polish Government in exile in London watched helplessly as Warsaw capitulated and was totally and completely destroyed.Historical facts:
*1939 — before the second world war began,
*36 million people lived in Poland: 1 million in warsaw
*Estimated that 16,000 members of the Polish resistance were killed and 6,000 badly wounded
*200,000 civilians were killed mostly from mass executions during the warsaw uprising
*In total 6 million people died in Poland during the second world war — half were polish citizens of Jewish descent
*before it was over, it is estimated that the second world war took the lives of 50 million people in EU