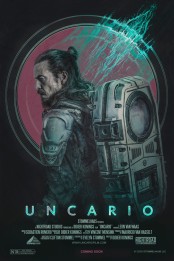 In a dusty future where Earth has been abandoned for centuries, the last humans have taken refuge in a colony on the Moon. Technician A-153-Cotter is slowly being driven mad by the cold, utilitarian life of the refugee base: He works alone, eats alone, sleeps alone, takes his orders from an A.I. His only comforts are his vivid dreams of a lush, green world he’s never seen. Late at night, Cotter secretly works on a plan to escape to this dreamworld and make it a reality. Hacking into a communication line, he picks up a distress signal from Earth — a voice — someone calling for help! Hellbent on making contact, Cotter steals a ship and launches toward the planet. After crash landing, he sees Earth as it really is — a desolate wasteland of blackened dirt and rock. Heartbroken yet headstrong, Cotter sets out to find the lost soul who sent the distress signal. But Earth soon proves to be a more formidable force that he thought. Cotter is in trouble. And who will save him?